War of the Grapes 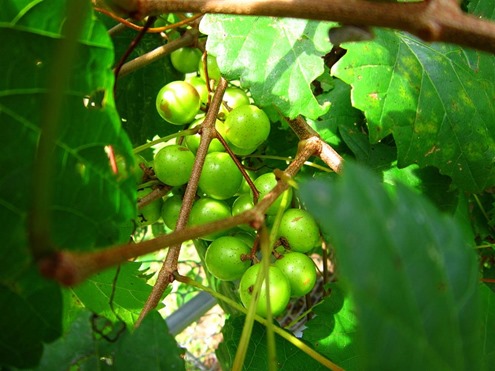 Three years ago this past Spring, the daughter called and said that she had purchased some muscadine grape vines, and would I like to have a couple. I said sure, why not, and she brought me two sprigs about a foot long and a quarter inch in diameter.  There were a couple of small roots on one end, but they really didn’t look like much.  Not wanting to build an arbor for such puny things to run on, I just planted them outside the chain link fence down by the road.  Hurricane Katrina had removed all the trees which were once there, so I thought they would at least camouflage the fence. They were pretty much forgotten for the rest of that year as they fought the weeds along the ditch bank for survival.

The next Spring, they began to put on a show.  Small vines shooting every direction.  I trimmed a few, allowing those that were running the fence to go.  By Fall of that year they had grown into two respectable vines.  I pruned them back over the winter of 2011 and had a pretty good crop of grapes last Summer. We watched them carefully, waiting for them to turn those beautiful purple and bronze colors. We could taste that first one. Biting through that thick skin. Filling your mouth with juice. The sweet, and at the same time, tart flavor of a muscadine. Muscadine jelly is the best there is.

We planned to pick them on a certain day.  Down the hill we went, bucket in hand.  There weren’t two cups of grapes to be found.  Lots of trash on the ground, along with the remains of partially eaten fruit.  It appeared the raccoons, possums, squirrels, and possibly deer, were watching as close as we were.

That brings me to the present.  The two vines have continued to grow, now covering nearly eighty feet of fence.  The abundant rain we have had this Summer has led to a bumper crop. 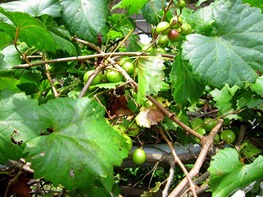 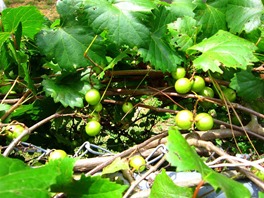 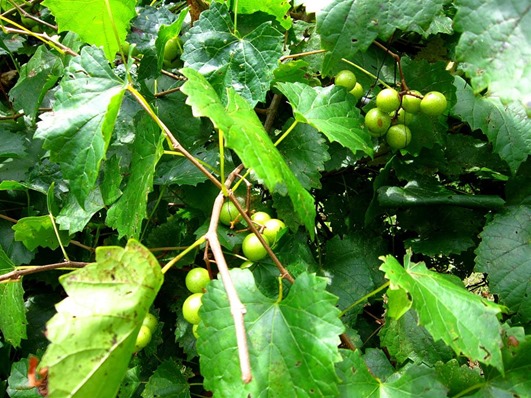 But, as I went through the gate yesterday for my walk, I noticed a disturbing site.  Lots of green fruit on the ground. 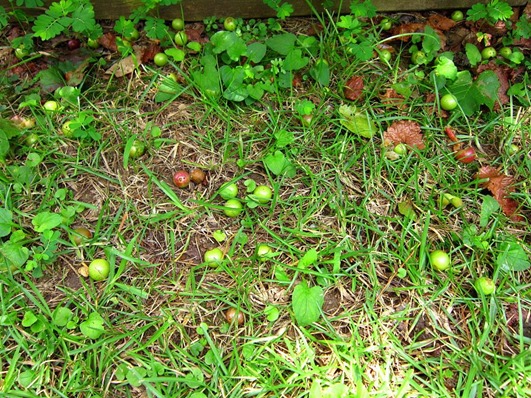 It seems a scouting mission occurred on Sunday night.  They are again planning an attack.
But, it isn’t going to be as easy this time.  Sally and I spent most of yesterday taking defensive measures.  We hung up some string and attached shopping bags to wave in the breeze. 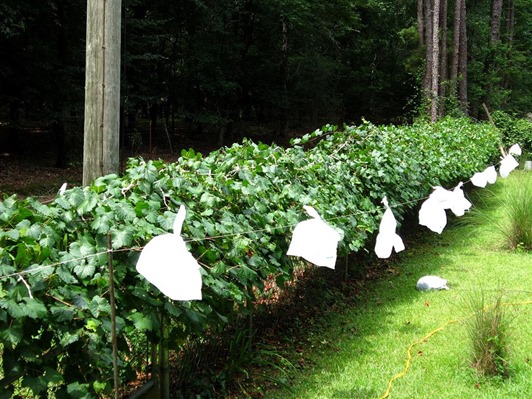 We placed blinking Christmas lights down the length of the vines.

We even built a scarecrow with flashing CD hands; and put a spot light on him. 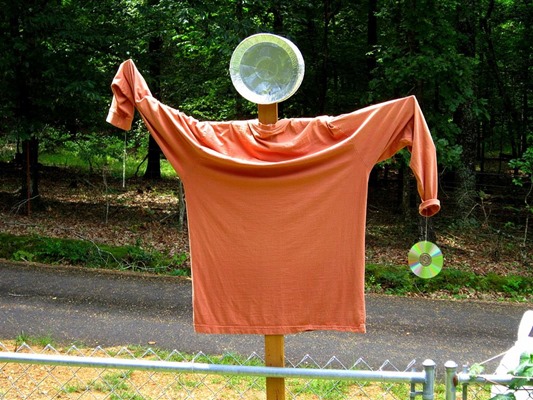 Set him up with a radio also. Tuned to late night talk.

I’m not sure if any of this will work on our critters.  I do know that it scared the crap out of Sally this morning.  I guess she forgot all our work yesterday.  As she went out at dawn this morning, seeing those flashing lights, along with the scarecrow all highlighted, and hearing that radio; she lost it.  She was barking the loudest ever.  She wouldn’t go down there, but she also wouldn’t turn her back on it to come in the house.  We had to pick her up to get her back in. 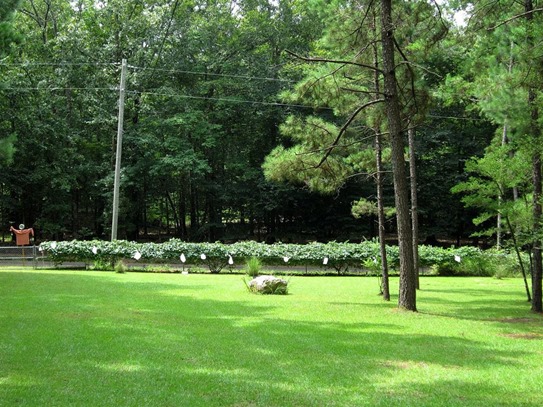 We’ll  have to see who wins the battle.  The critters will probably come up with counter measures.  That will mean more work for us. I wouldn’t place any bets, either way…jc
Posted by JerryC at 5:01 PM 13 comments: 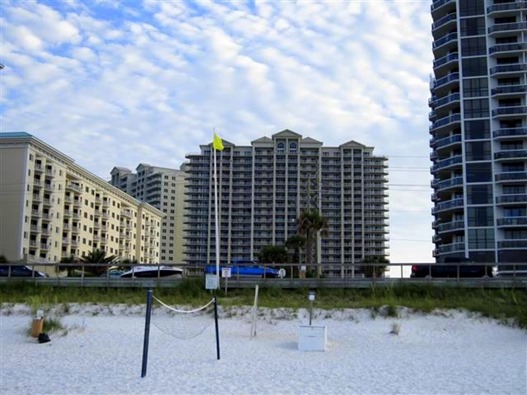 Our youngest daughter and her husband had the use of a condo in Destin, FL last week.  They were kind enough to invite us, our grand daughter, and a family friend to join them for part of that time.  It was one of those way up there in that building in the center.  The view from the balcony wasn’t bad.  You could hear the surf washing ashore. 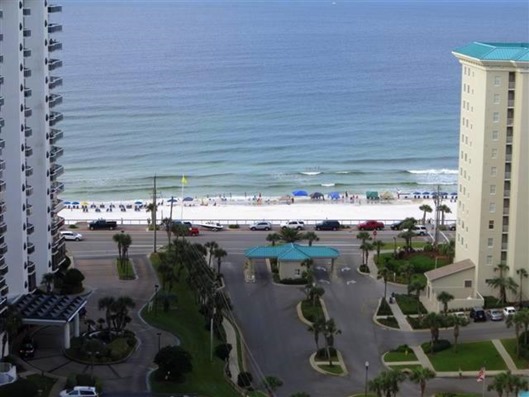 Lots of people around, though. 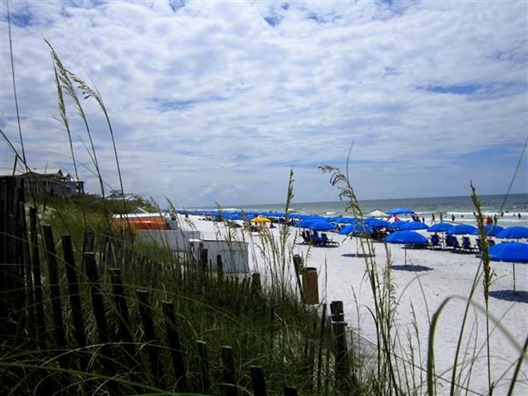 We decided to escape the madness one day and go kayaking.  An hours drive North found us in another world.  Deep hardwood and pine forest, and a blackwater creek. 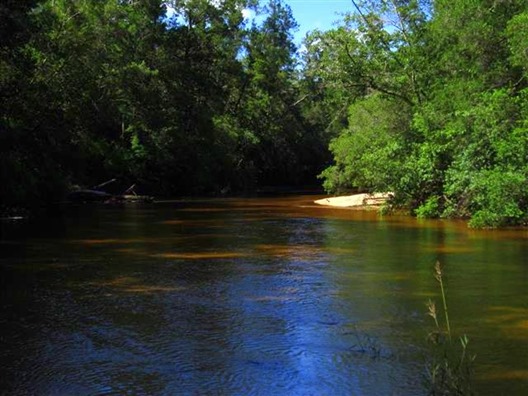 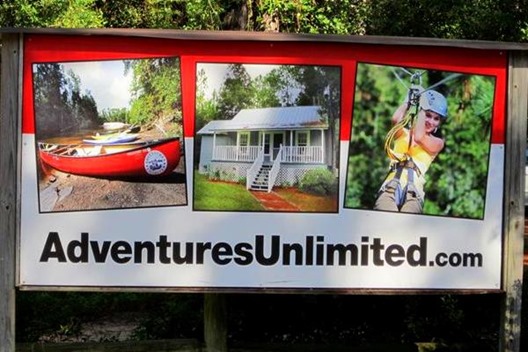 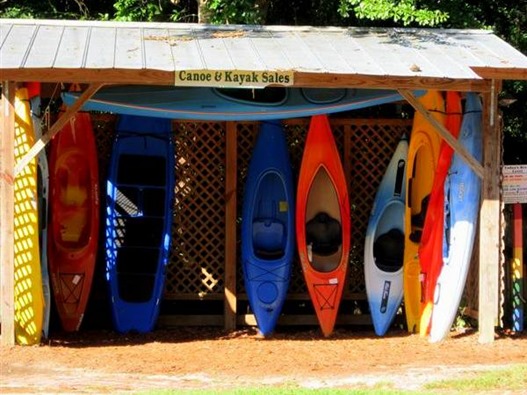 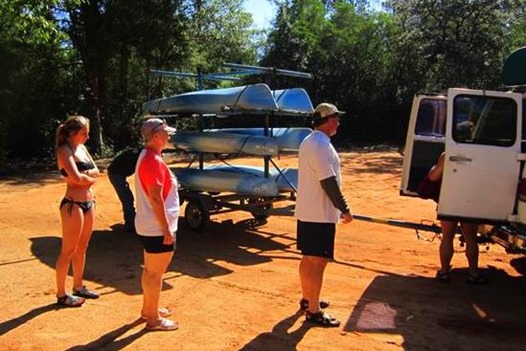 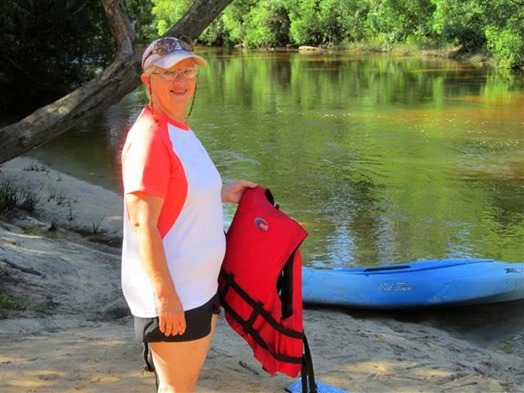 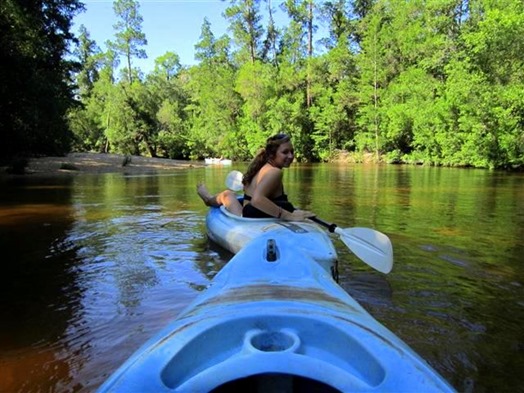 Stopping for a swim. 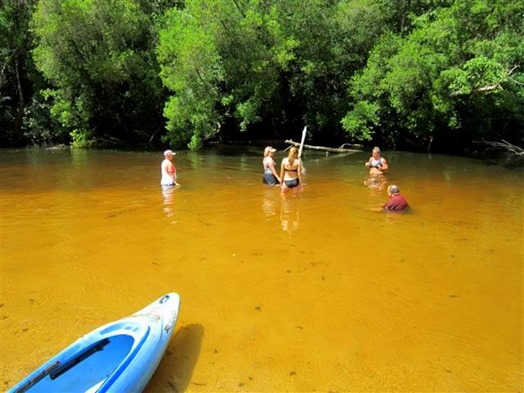 The other days were spent lounging around, doing a little shopping, and trying to find the best seafood in the area.  Seems a place with the name of Stinky’s won the best of show; and taste. 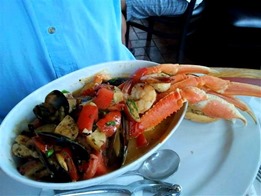 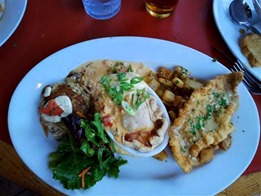 The best part of the trip though, was just getting to spend time with the grand daughter.  She an adult now, in college, and has a busy life.  Glad she found the time to share with us. 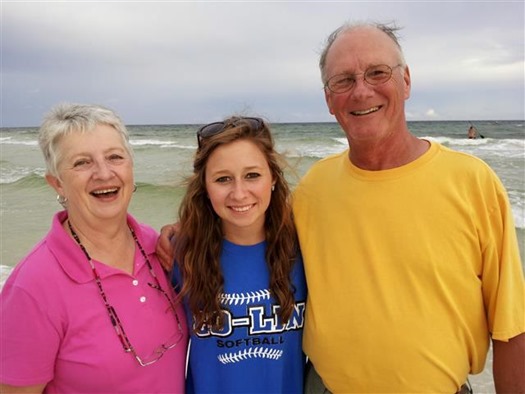 Hopefully we all were able to, 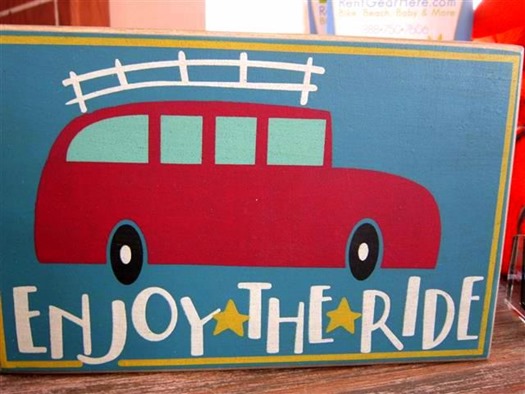 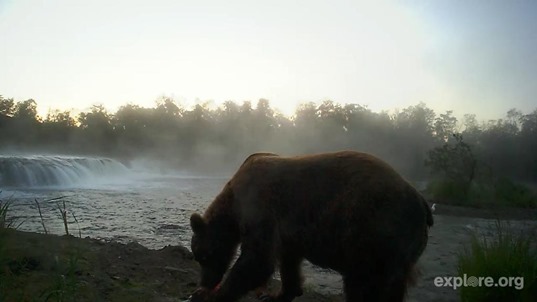 There hasn’t been much going on around home that was worthy of blogging material the past few days.  Wanda is still making trips to Jackson to help deal with her mother’s situation.  Sally and I just hang out, cut a little grass, do a little weed-eating, etc.  I find myself spending more time on my computer than I should.  Reading blogs, making an occasional comment, following links, etc.

Yesterday, I stumbled upon a very unique live webcam.  I found myself sitting in my chair watching it for over an hour.  Much better than watching TV.  At one time there were nine bears on camera.  A couple were up on top of the falls, catching salmon in their mouths.  A couple more were practically submerged below the falls, and would actually dive under the water and come up with a fish.

The picture above is a capture I took early this morning.  A minute or so later the bear turned and looked directly into the camera, but I wasn’t quick enough to catch that.  It was like it was looking directly at me. Almost spooky.

The camera is located on the Brooks River in Katmai National Park, Alaska.  The link is  http://explore.org/#!/live-cams/player/river-watch-brown-bear-salmon-cams

Check it out.  Bet you will find yourself sitting a spell, and watching some of Nature at its best.

Thank you for giving us the Freedom of Life, Liberty, and the PURSUIT OF HAPPINESS!!!

We are truly blessed to be Americans….

As Wanda and I sat on the porch this morning, enjoying our coffee in the cool breeze, I found a large lump in my throat as I read about the nineteen young firefighters that lost their lives yesterday.  Nothing can compare to the pain their families are feeling.  Please keep those families in your thoughts and prayers. 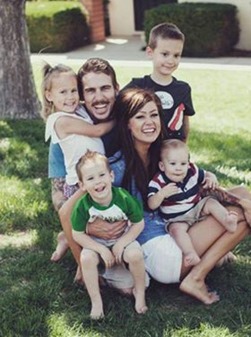 Granite Mountain Hotshots crew member Andrew Ashcraft, a husband and father of 4 is one of the 19 fallen.

If you feel a need to do something more, here’s a link.