About the time of the Spanish-American war in 1898, Fort Pickens began a modernization effort.  The old smooth bore cannons were upgraded with rifled inserts or replaced with totally new rifled guns.  A new gun battery called Battery Pensacola was constructed on the parade ground of the old fort. 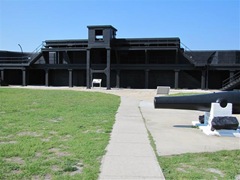 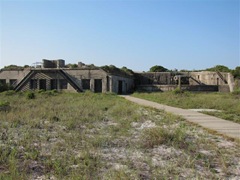 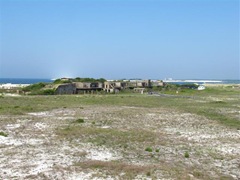 This gun battery, along with other batteries outside of the fort, was constructed of reinforced concrete.  They were equipped with the latest fire power of the era. 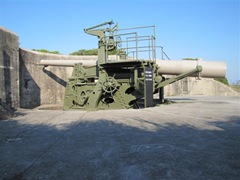 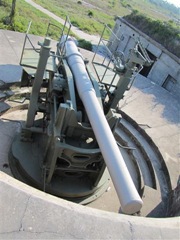 These guns were able to duck and hide behind the bulkheads while being reloaded and aimed.  There were two spotters for each battery which took compass headings to the target and then relayed that information to the gun crew.  The crew then translated that into an aiming point by using a triangulation process. You can imagine all that went on as levers were pulled and wheels spun to set up each shot before the gun was kicked up over the bulkhead and fired, all to be repeated as the target moved and new data was received from the spotters. 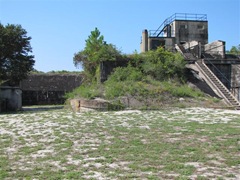 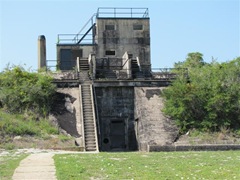 There were also batteries that contained mortars.  This one, called Battery Worth, held eight 12 inch mortars, capable of launching 700 pound shells up to nine miles. 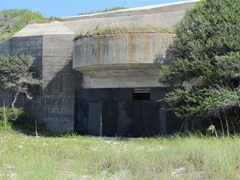 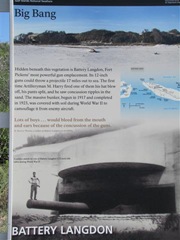 It only got bigger from there. Battery Langdon had 12 inch guns, that when fired caused a shock wave to travel through the sand of the island, and the concussion was said to have caused bleeding of the ears and mouth of the crew.

A mix of these different batteries were used through world war II.  All were officially retired in 1947.  As the newer technologies such as radar, better aircraft, and a modern Navy emerged from the war, there was no need for fixed defensive positions.  After 113 years of service to our country the area is now part of the Gulf Islands National Seashore. 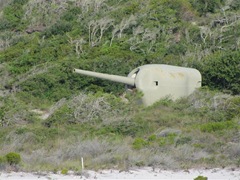