Today marks our 45th. anniversary.  Looks as if the marriage will work out.  Sure hope so.  I don’t think there is anyone else out there who would put up with me.

The kids gave us a giant card in honor of the day. 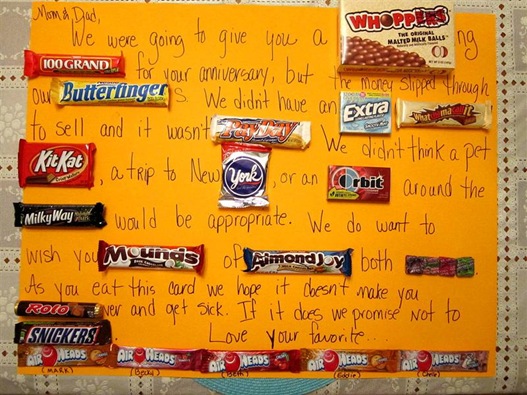 In case you can’t read it, it says;

“Mom & Dad.  We were going to give you a whopping 100 Grand for you anniversary, but the money slipped through our butter fingers.  We didn’t have an extra whatchamacallit to sell and it wasn’t payday.  We didn’t think a kit cat, a trip to New York, or an orbit around the Milky Way would be appropriate.  We do want to wish you mounds of joy, both now and later.  As you eat this card we hope it doesn’t make you rollover and get sick.  If it does, we promise not to snicker.  Love, your favorite airheads.”

It’s going to take a while to eat all that candy.  I’m pretty sure the idea came from Pinterest, but still think it’s pretty cool.

On another note.  we’ve finished reading the book I received from Janna a couple weeks ago.  If you would like to read it, leave a comment or drop me an email.  We’ll pick someone at random if there are more requests than one, and get it in the mail to you.  It’s a good book.  A quick read of a nice story, intertwined with some life lessons.  Only a few Kleenex moments, mixed with smiles, and a happy ending which may bring on a few more tears. 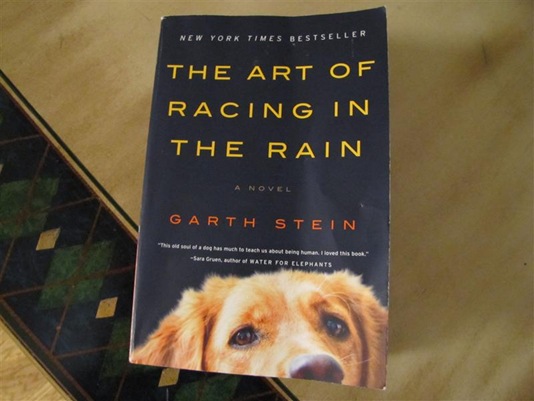 That’s about it for the weekend.  Later……….jc