I had read a number of comments the past few years about the Cobb Grill.  Seems everyone was raving about what a fantastic job they did with just a few briquettes and a little time.  Fire it up, put  whatever, on; and forget about it.  Come back in a few hours to a delicious meal.

Well, WOOT had a deal on one sometime back in the Winter and I ordered it.  It came with a nice carry bag and a cook book.  I read the instructions, such as they were, along with the cook book, and fired it up.  First thing to go on was some pork ribs.  They came out partially cooked and very tough.  Decided to try something else and went with chicken.  Added more charcoal halfway through the cooking period, but it was still undercooked when we took it off hours later.  Made another try on some babyback ribs.  We weren’t impressed with the results on those, either.

All that took place back in December or January.  The grill has been sitting in the shop since that time.  Decided to give it another shot this past weekend.  I asked Wanda to pick up a couple of chicken halves.  That led to another story.  Chicken halves seem to be a thing of the past.  Everyone wants parts, nowadays. It’s either whole, or smaller pieces.

Anyway, she purchased a whole chicken which appeared to have weighed six or eight pounds when alive.  We split it ourselves and put it on the Cobb.  I added five more briquettes after a couple of hours cooking and this is what it looked like after three hours. 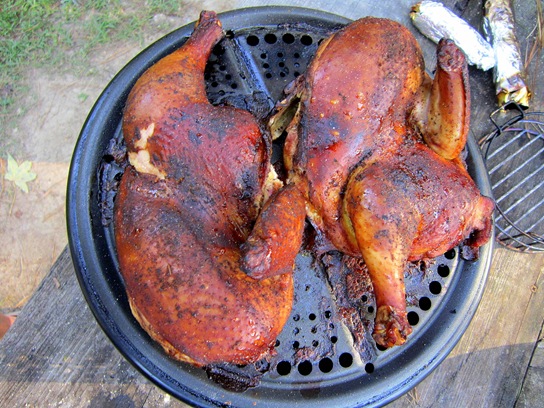 Cooked to perfection and pull apart tender.  It seems the Cobb is designed for Summertime use.  It did a fantastic job with the temperature in the eighties.  I think I’ll try those ribs one more time.  I might come to like this grill, though I’ll never abandon my $15.00 Walmart  special. I use one a year.  One of the best deals you will find. 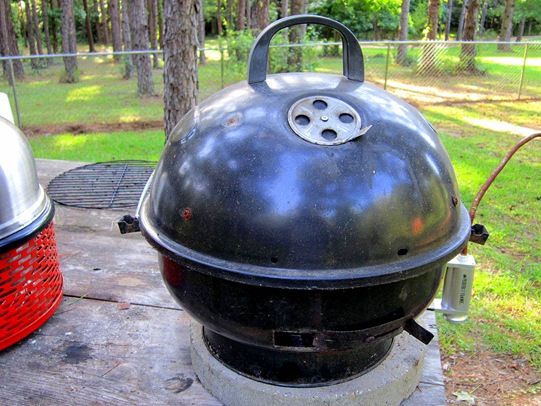 There is a lot to be said for outdoor cooking.  Think I’ll make that a subject for another post……jc