We spent two nights in Cortez, CO at a local RV park just a few blocks from downtown on the main street.  We had stayed there once before back in 2010.  Nothing special, but it was clean and the workers were super nice.  Had the truck serviced at Walmart, did laundry, bought groceries, and watched some college softball on television.  First tv in almost a month.  Didn’t appear we missed much.

Other than that, nothing else to report on Cortez.  We left there early Sunday morning for Ouray.  We wanted to get a spot in Amphitheater campground which is just out of the town.  Arrived and was set up by around noon.  Spent the rest of Sunday just resting and napping at our site.

Monday morning found us doing the tourist thing in town.  Hwy 550 South toward Silverton is closed to all traffic each day between 8:30 AM and 6:30 PM except for a one hour window between 12:30 and 1:30 PM.  It has really hurt the tourist visitation so far.  They hope to have it back open by June 13.

After returning to the CG around noon, I decided to take a hike to the Upper Cascades.  The map showed it to be around 2 miles one way, with a few (3-4) switchbacks along the way. 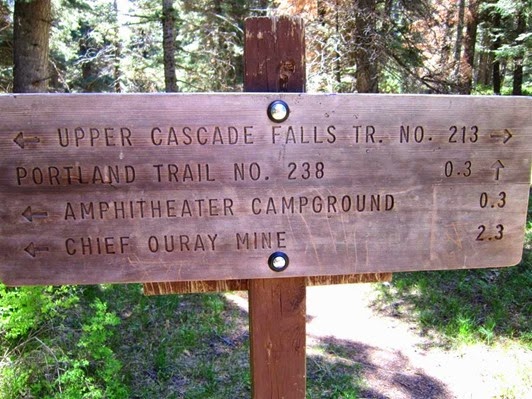 It started off fairly mild, going through some scrub oak. 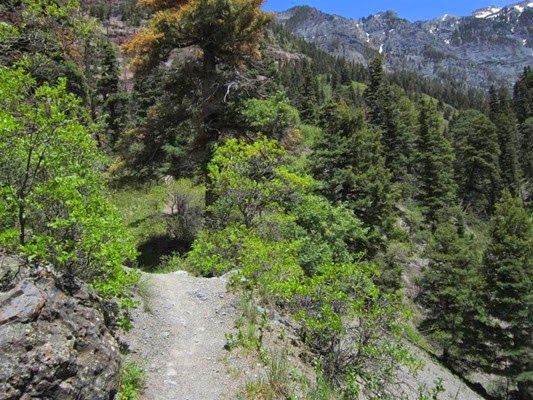 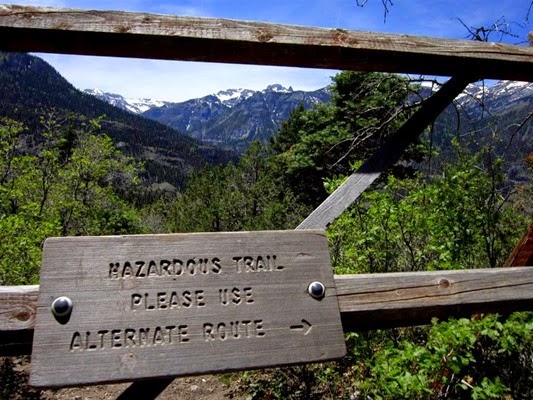 So easy, I stopped to take a picture of a flower.  About the size of a quarter. 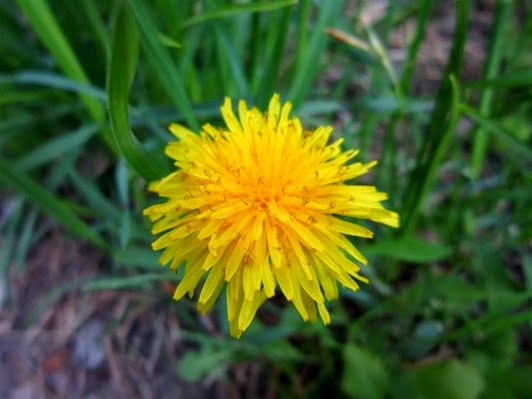 Soon came to a fork. Of course my trail went up.  Started the first of the switchbacks. 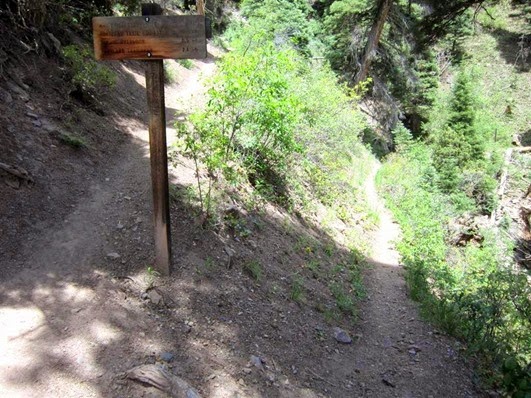 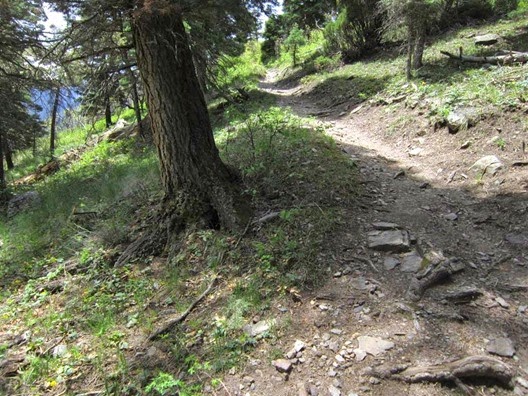 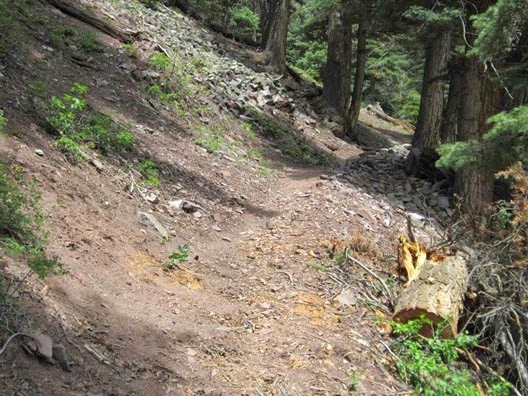 And more up.  I think there were twenty or more, each a hundred yards or so in length.  I finally quit looking up.  Just watching my feet and waiting for the turn which meant another rest period. 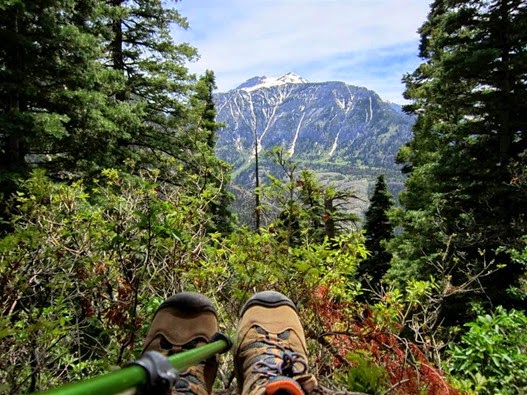 I don’t have the exact altitude for the area we are in, but it’s safe to say that I started the hike at over 8000’ and had to have gained over 500’ on the way up.  For someone that has lived their life at 350’ altitude this was one tough walk, or crawl.

I only took my little point and shot, which was inadequate for the shots I wanted to take across the canyon.  I’m glad I didn’t have the bigger camera though.   I probably would have hung it on a tree for retrieval on the way back down.  Water was running down every crack and crevasse.  Dozens of waterfalls in every direction. 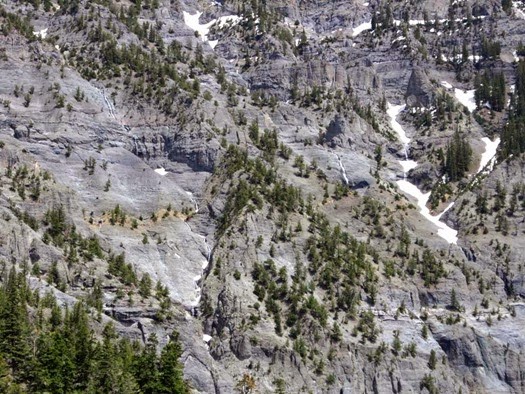 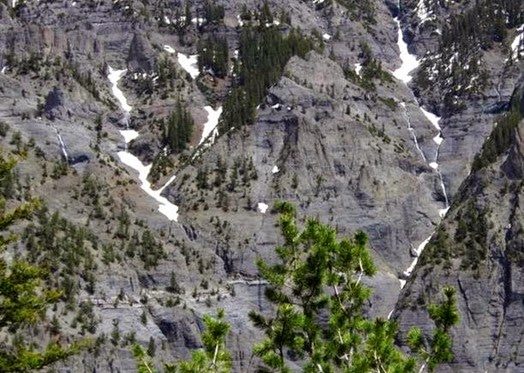 I didn’t know how long the hike would take me, but after a couple of hours of steady climbing, I was about to give it up and turn around.  Was it around the next switchback, or what?  Was I even on the correct trail as I hadn’t seen another trail marker, or any other hikers.

Finally I broke out of the switchbacks onto a more level trail. 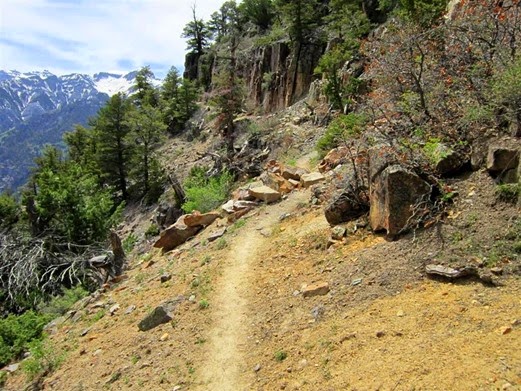 Ouray, from way up there. Looking back into Yankee Boy Basin. 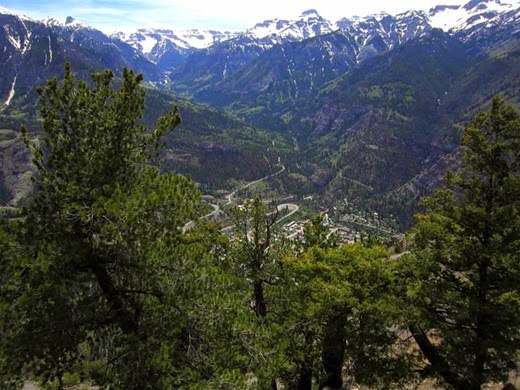 Around a curve, into some more trees, and saw this. 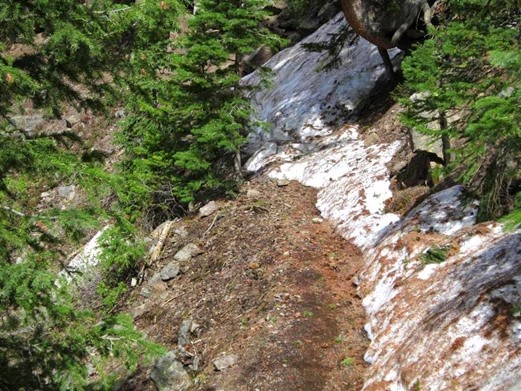 Slowly made my way through. 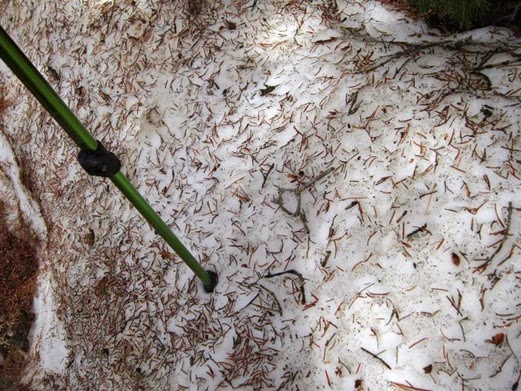 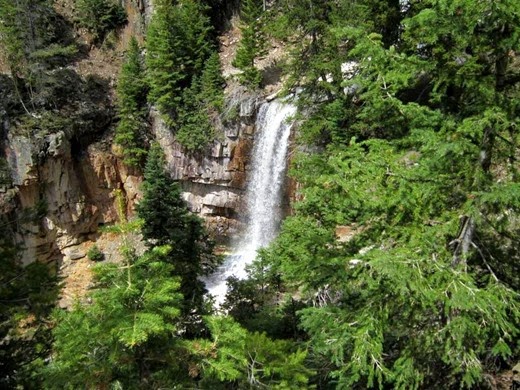 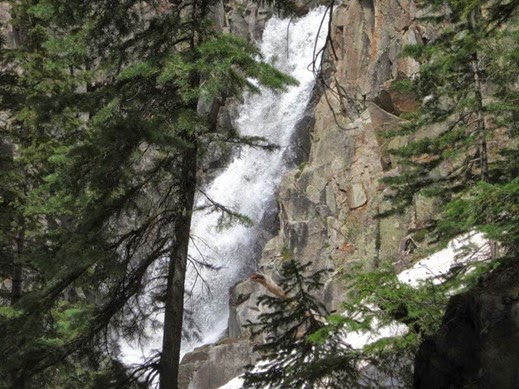 Not the most spectacular waterfall I’ve seen, but still worth the hike.  Sat there listening to the roar for a few minutes, ate an apple, and thought about all those steps downhill.  As tough as climbing uphill is, going downhill is more dangerous.  Small rocks become ball bearings, and larger ones are just waiting to turn a ankle if you aren’t careful. 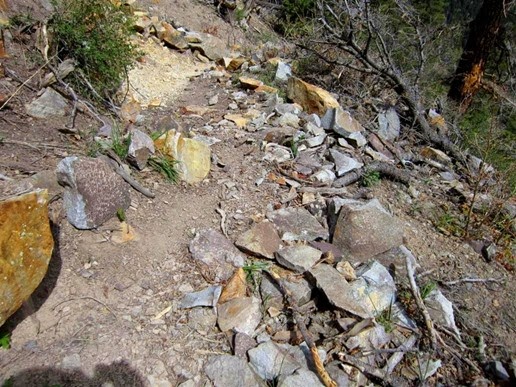 Only stopped two times on way down. 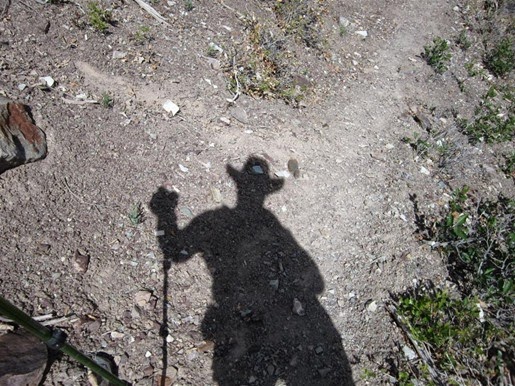 Was sure glad to catch this little glimpse of white through the trees. 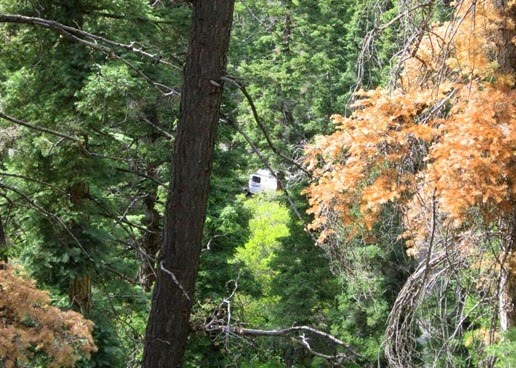 Another on in the books……jc