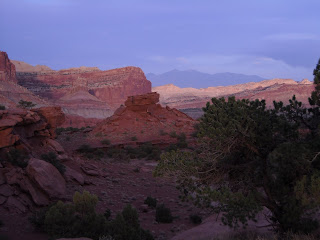 Have spent the last few days getting things back to normal around the house.  It has been really hot and humid since we got home, so the outside chores must be done either early or late.  The middle of each day has been spent inside under the AC. Did manage to smoke a couple of pork butts today for the neighborhood 4th of July get together.
Also got around to finalizing our expenses from the trip.  We spent 47 nights in 27 different campsites.  All were either National/State Parks, NFS/BLM/COE, or commercial parks.  The lowest fee we paid was $5.00 for a NFS campground in Wyoming, and the highest was $42.00 at a commercial park in Long Beach, Washington.  We spent a total of $926.00 on campsites for the trip.  I'm sure we could have spent a lot less by moving inland away from the coast through Northern California, Oregon, and Washington, but we wanted to drive and stay along the coast, and that's what we did.
As for gasoline, we spent $2,128.00 for a journey of 8102 miles.  I averaged a little over 14.3 mpg for the entire trip.  I didn't try and keep up with the difference between when we were towing the Casita, and just riding around.  Too much trouble to try and keep separate, as far as I'm concerned.  The highest price we paid for gasoline was in Klamath, CA at $4.29 a gallon.  The lowest we paid was last Thursday morning in Olive Branch, MS at $3.35 a gallon.
I won't include what we spent on groceries, souvenirs, eating out, etc; because every one's will be different.
Ever since we purchased our trailer nearly 5 years ago, I have plugged in place marks on Goggle Earth at the place's we have camped.  After putting in the ones from this journey, I counted them up.  From August, 2006 until now, we have camped in 105 different locations in the US and Canada. Quite a number of them, more than once.  My goal is to expand that to at least 250 in the next five years. 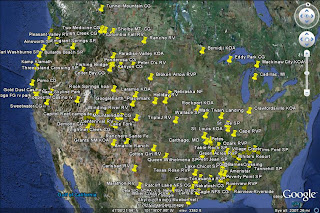