I guess you could say that we made a mad dash for home after departing the Ft. Davis, TX area.  We were on the road by eight or so, and found ourselves at Pedernales Falls State Park near Johnson City for the evening.  Having purchased the Texas State Parks pass this year, I felt the need to get the best use of it.  The park campground was quite nice, with large, shaded sites.  Sorry to say that we did very little, but sit and enjoy the evening.  I did walk Sally down to some small falls, but didn’t have my camera with me.  A good reason to visit there, again.

The next day we said goodbye to our traveling companion in Livingston.  It felt funny driving off and not seeing her in the rear view mirror.  An hour or so later found us in one of our favorite campgrounds.  Seems we always make it our first stop heading West, and our last before getting home.  Sandy Creek COE, near Jasper Texas.  $8.00 a night, water and electric for a site like this. Temperature was in the 70’s. 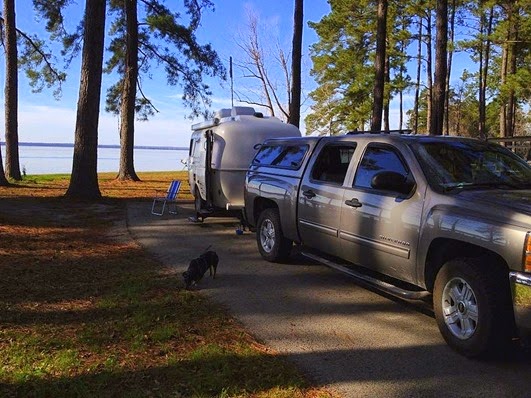 We had an early dinner, and our last campfire of the journey.  Watched a little television before turning in.  Found out a cold front was coming through during the night.  Made our decision whether to stay an additional day, or not, easier.  Woke to a cold North wind.  Sally huddled in the trailer as we fixed some breakfast.  We were on the road by nine, had lunch in Alexandria, LA, and home by 3 PM.

We went about doing the normal things around the house after being gone six weeks.  I restored power to our well pump, but as I was leaving the pump house, I heard the pump cut off prematurely.  Never a good thing.  After checking all the possible causes, I came to the conclusion that it was toast.  A friend helped me pull the pump on Friday morning, and my diagnosis was confirmed by our local well expert.  The pump was almost twenty years old, so guess we got our monies worth.  When I asked for the same brand and quality for a replacement, he just laughed at me.  Said they don’t make them like that any more. I left with the same size pump, but something tells me it won’t last twenty years.

While working on the pump, we received word that a cousin which was very close to our family had passed away.  The weekend was taken up with visitations and the funeral.  Monday brought trips to town for groceries, fuel, and other sundries.  It’s funny, how once you are retired, you never pay any attention to holidays.  Went to the post office, to find it closed for Presidents Day. Who knew?

Today, Tuesday, finds us inside for most of the day. The Winter storm  moved over our part of the Country yesterday afternoon, dropping the temp from 68 to 37 in an hour and a half.  Thankfully, the rain had stopped, and we had no ice or snow.

Not much planned for the next few weeks, so posts may be few, and far between. There’s a trip on the horizon, though….jc